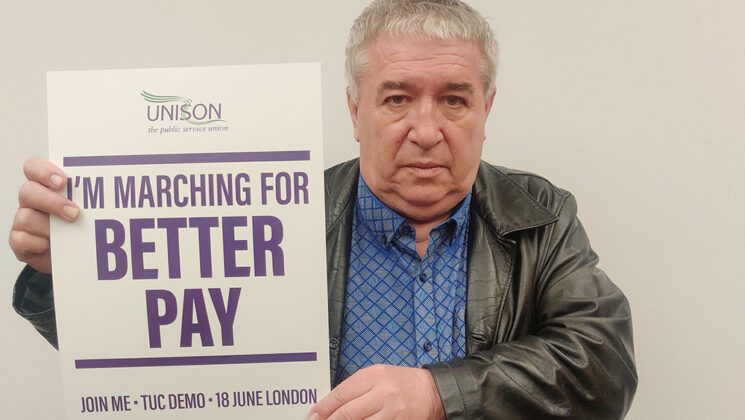 UNISON members from Bolton will be heading down to London for the TUC cost of living national demonstration on 18 June, with the branch putting on a coach from Morrison’s Black Horse Street Bolton, and a number of Bolton activists heading to London directly from Brighton and the union’s National Delegate Conference (14 to 17 June).

Paul Holmes, UNISON national president is calling for the union to take centre stage in the fight against a Conservative government presiding over growing financial misery. The union is backing the TUC national demonstration in London, which will see marchers from across the British union movement come together to call for a new deal for workers.

“It’s obvious what’s going to happen over the next six months, with the cost of living crisis. We must recruit members and link up with other unions”.

“Big Bill Haywood, an American trade unionist in the 1920s, a miners’ leader, said that everybody that’s got a dollar that they didn’t earn, somebody who did earn it didn’t get it”.

“That’s what I’d like to see happen; that the money that’s being earned goes to those who are earning it. What we’ve seen, particularly since the COVID crisis, is money flowing all over the place; to people who know people in the government, but not to our members who saw us through the crisis”.

Paul says that decent pay rises need to be financed and work needs to be brought back in house in public services. He doesn’t think it was a “coincidence” that the announcement of a windfall tax and extra help for struggling households came the day after Sue Gray’s report into lockdown parties in Downing Street shone a light on a sordid, boozy, rule-breaking culture.

So what can UNISON do?

“The first step to winning is convincing your troops that you can win. I’m used to winning. I’m in a branch with 10,000 members. I’ve done 200 gross misconduct disciplinaries and never had a dismissal. I’ve had one compulsory redundancy in the council in the last 33 years. So I’m used to organising to win. So my positive message is: we need to get a new generation active, because young people are really, really suffering”.

Roll on UNISON conference and the TUC march!

Book on the coach:
Book your place on the coach by emailing admin@unisonbolton.org or dropping us a call on 01204 338 901.

Could you be a UNISON Health & Safety Representative?
Retired Members Support the Rail Workers!!